Purpose of your Stock PCV System:

The PCV (Positive Crankcase Ventilation) system is designed to regulate and remove fumes from the engine crankcase, and to alleviate crankcase pressure which could cause oil leaks or seal damage. It’s a way for gases to escape in a controlled manner from the crankcase of an internal combustion engine.

During normal operation of an internal combustion engine, there’s a compressed air and fuel mixture inside the combustion chamber that is ignited and as a result, forces the piston down. A small amount of that ignited mixture leaks past the piston rings and ends up in the crankcase. This leakage is often referred to as “blow-by” (leakage past the piston rings), as well as oil mist.

Some of the oil mist and other products settle along the engine intake and over time form a “gunk.” The oil catch can collects the oil mist and condenses the fuel vapors while allowing “cleaner” gases to be passed back into the intake. Typically the blow-by gasses are passed through a wire mesh, which give the vapor droplets something to adhere to. Since the oil catch cans condense the vapor portion of the gasses, they will need to be drained periodically of all the oil, fuel and other contaminants.

In addition to the air/fuel mixture and oil mist, there’s also the possibility of condensation, or water droplets. Condensation is more susceptible in humid climates, but it can exist anywhere there is fluctuation in temperatures in a hot to cold environment.

This problem has been around forever. In the past, engines were equipped with breathers that would allow the crankcase to “breath”. The addition of these breathers resulted in moderate engine life improvement. However, it was not until the engine’s crankcase was fitted with a vent or evacuation tube that major improvements were experienced. 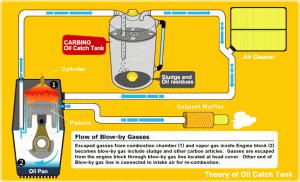 A PCV (Positive Crankcase Ventilation) system exists to help counter this problem and expel the gases out of the crankcase and back into the intake manifold. Because the intake manifold is at a lower pressure than the crankcase, suction is created keeping the PCV system going. On engines equipped with a turbocharger, a check valve is sometimes used to prevent pressurizing the crankcase during boost. 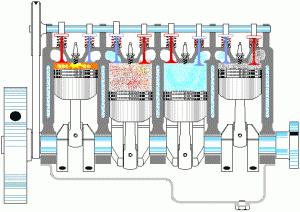 First there was nothing more than plain breathers to allow excess crankcase pressure to be released or vented. But the damage from not “flushing” all the gasses out resulted in very short engine life (of course the oils of that day were nothing like the protection today’s synthetics provide) so the next change added a vent tube, or evacuation tube that ran from the top of the crankcase to low on the car where the air streaming past would create a suction, or vacuum that would pull the vapors out and vent them directly into the air with a breather (barely filtered with a wire mesh type media that was oiled to catch dust and dirt) allowing the “fresh” makeup air in to complete the flushing process. Now this resulted in greatly increased engine life, but as the motors got worn oil would start to drip out the tube and drip onto the roadways, then the rain would wash it into the ditches, where it would enter the ground water (you know the rest of the EPA story) and the gasses just vented to the air.

As the EPA and the powers that be mandated stricter emission laws the system was refined more and more ultimately evolving into what we have today. A completely sealed system that uses the vacuum provided by the intake manifold to draw these vapors out, and the filtered fresh makeup air is drawn from the main air intake system and filtered by the main air filter. This results in very clean emissions, but the unintended issues are the detonation or “knock” that occurs when oil is introduced into the combustion chamber that the knock sensors pick up (before we can hear it) and pull timing to protect the engine from damage, and thus reduced power. Another result is the carbon buildup on the valves & piston tops (any techs reading this can surely verify the amount) also resulting in decreased performance and less power made.

The purpose of a proper oil separating catch can is to route these gasses through a baffle system that provides the most contact possible with the outer surface resulting in the oil being trapped and removed from the other gasses that do continue on through the intake and are burnt and consumed. It does NOTHING else in ANY way to the engine oil itself….it can’t. Not all Catch Cans are created equally! Often imitated, never duplicated. Most Catch Cans on the market are just comprised of an empty container with 2 ports. While that simple design may trap a few oil droplets, a well-engineered Catch Can is designed to condense the oil vapor and trap the oil inside the container. Catch Can

A test proven design incorporates a stainless steel mesh and screening mechanism that acts like a maze to collect and condense the oil vapor. Once the oil vapors condense into liquid droplets, it falls to the bottom of the can. In addition, the top assembly is specially designed to keep any liquid from climbing out the exit hole during aggressive driving conditions. You will be amazed by how much oil a well designed and engineered Catch Can will catch! Don’t settle for an empty can without any internal baffles and collection systems. The lack of an effective baffle system allow oil to be pulled directly through the intake manifold.

In comparison, the “O-Reilly” or “Autozone” oil separator, it will, and does catch a small amount of the oil but the majority still gets past into the intake.

Why don’t the auto manufacturers incorporate something similar? Cost and the added maintenance was deemed something that would NOT be accepted by the general market (even though it is as simple as draining the can at each oil change).

Bottom line is this: The OEM system does a great job of meeting emission standards and removing the harmful contaminants, but the unintended consequences are the oil that is drawn into the intake charge. For an engine to produce the maximum amount of energy per explosion (of the A/F in the combustion chamber) you want air and fuel only….any amount of oil in this mix will hamper the explosion resulting in less energy released, detonation, and carbon buildup. Trapping and removing this oil before it gets into the combustion chamber is the ONLY solution to maintaining the maximum efficiency and prevent excess carbon buildup. A correctly designed and installed Oil Catch Can solves this problem.

This shows how much oil can be caught between oil changes. Don’t let this oil make its way back into your Intake Manifold. 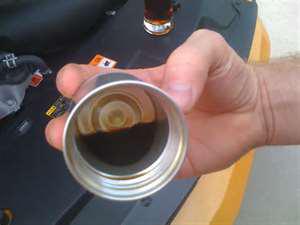 So why does somebody need an Oil Catch Can Tank ? The reason is, that the valve rings do not create a perfect seal. If they did the pistons would not be able to move up and down. Because there is a tiny gap between the cylinders walls and the pistons, a little bit of pressure is able to escape into the valve cover area and crankcase. At the same time burnt oils are also escaping into the valve cover area. This is called “blow-by”. The contents are nasty and will eventually make its way into the PCV line and Breather. The PCV line will recycle these burnt solids back into your intake manifold which will increase the level of carbon solids, and reduce your octane levels. For a boosted setup with turbo and supercharger, the Breather line will recirculate some of these oils into the intake which will go into the intercooler. Of course, the intercooler works best when the interior surfaces are nice and clean. When the breather line returns any fumes with oils into the intake, this will start to coat the inside of the intercooler with oil, and reduce the heat exchange efficiencies.

So, the simplest solution is to insert an oil catch tank can into each line, this gives these heavy oil solids a place to enter and pool. There are many shapes and sizes, and even different configurations which are closed-loop, and open loop.

There are various negative effects of not having a properly designed Catch Can installed and allowing excess oil vapor contaminates the intake system from the stock PCV system – such as:
Previous Post
Next Post 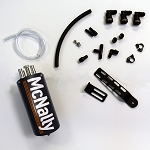 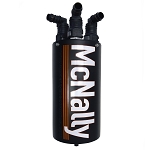 Gen 2 Oil Catch Can ONLY by McNally